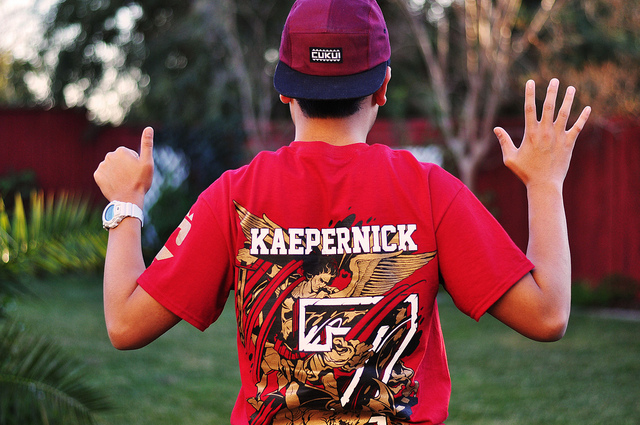 Unless you’re an American football fan, you probably hadn’t heard of Colin Kaepernick before August 2016. Kaepernick, an African American, was a quarterback for the San Francisco 49ers when he was propelled into the media spotlight for choosing to sit (then later kneel), during the United States national anthem at the start of NFL games. Kaepernick was protesting racial injustice and alleged police brutality towards African Americans. His controversial actions divided the nation.

In a proud and patriotic country, Kaepernick’s protest was seen by some (including the president) as an insult to the flag and its military. To many, he became a hero. Despite the controversy surrounding Kaepernick ‘taking a knee’ during the anthem, other players followed his lead. Their pregame protests began to dominate the news during 2017 when the country’s president publicly criticised the players’ actions. Ultimately Kaepernick, who was thrust into the international spotlight, as a result, paid a heavy price for his activism, opting out of his 49ers contract early because he believed they did not intend to renew it. At the time of writing, he has yet to be signed by another team.

On 3rd September 2018 Nike revealed their new advertising campaign, featuring Kaepernick. The words, ‘Believe in something. Even if it means sacrificing everything,’ followed by Nike’s, ‘Just do it,’ slogan, appeared on billboards across America. The reaction in the media and on social media was immediate. People who were deeply opposed to his stance and his activism took to social media to criticise the company. The U.S. president questioned what Nike was thinking in a tweet. Experts debated the wisdom of Nike’s decision to make Kaepernick the face of their campaign. Analysts watched the company’s share price and sales—looking for confirmation that its new, seemingly risky marketing strategy had harmed their brand.

Among all the speculation and the noise, one story seemed to confirm Nike’s foolhardiness. A former Nike customer, Sherry Graham-Potter posted an open letter to the company on Facebook, objecting to their portrayal of Kaepernick as a hero. In the letter, she wrote about how her life had been devastated the night her husband, a police officer, was killed by a vehicle while in pursuit of a suspect on foot. The couple had only been married a month. Their two young sons (from her previous relationship), who her new husband had raised as his own were bereft. Mrs Graham-Potter went on the describe how her husband’s death had left her broken. She couldn’t eat. She barely left the house. Then she told the story of the moment when she found the courage to go on. Even as she was grieving, Mrs Graham-Potter realised she had to do something. She had to move her body. So, she put on her Nike cap and went for a short run. For those few moments on the road, she felt like a ‘normal person’, and that feeling kept her going.

Here’s some of what she wrote;

“That black cap became a symbol to me, it is sweat-stained and its shape is gone, the buckle in the back barely closes; but that hat represents my family’s rise from the ashes. It stands for the strength and the sacrifice we made loving a man who had a job that we all knew could end his life, every time he walked out that door. And it did. And I accept that.

I still wear this hat, I wore it on my run this morning.
And then I heard about your new ad campaign.”

I quote Mrs Graham-Potter here, to show how the campaign divided Nike customers. But also to point out that what the Nike brand symbolised for her at her lowest moment aligns with the company’s mission. And to perhaps shed some light on the reasons why Nike was willing to take the risk of making Kaepernick the face of their campaign.

Nike’s mission is, ‘to bring inspiration and innovation to every athlete in the world.’ The company’s conviction is that they have the power to change how people feel about what they can achieve when they wear the Nike logo. Shelly Graham-Potter’s heartfelt words about how she gained strength from that Nike hat likely gave the team at Nike the courage to weather the storm surrounding the Kaepernick campaign. Nike’s decision about what story to tell was based on their beliefs about who they are as a company and the change they’re here to create for whom. They followed through on that, knowing that their decision would polarise people.

Marketing analyst, Professor Scott Galloway, declared Nike’s decision as ‘genius’—the ‘most gangster marketing move of 2018’. According to Galloway, the Kaepernick campaign also stacks up commercially. He estimates that of Nike’s $35 billion in annual revenue, $20 billion is generated overseas. Two-thirds of Nike consumers are under 35 years old. They are likely to live in urban areas and have above average disposable income and a progressive worldview. Extrapolating from this data, Galloway says that Nike risked $1-3billion in revenue to deepen the brand’s connection with customers who represent $32-$34 billion in revenue.

We sell storytelling short when we think of it as only the means to get attention. Stories, well-told are the way we make an emotional connection with the people who believe what we believe—which is why the most successful brand stories aren’t for everyone.

Choosing To Be Better

The Measure Of Greatness

The Downside Of Competing For Customers