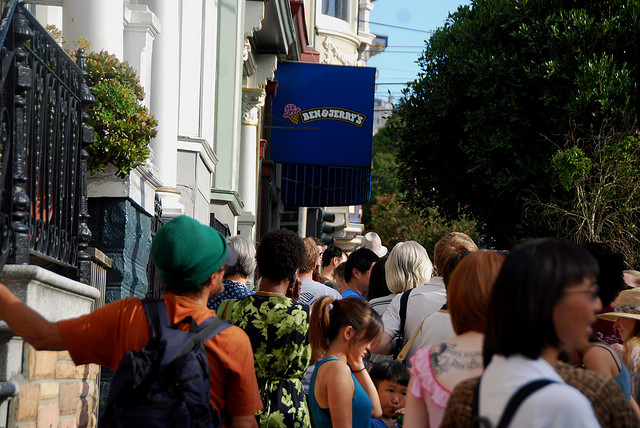 The little gelato place down the road from us is dying. For three years straight they were the only good enough ice cream place in the boat harbour. The lack of competition meant that they could steadily increase their prices from $3.80 per scoop to $5.80 while continuing to staff the store with young, casual, minimum wage workers. Almost $6 for a single scoop of gelato was an indulgence for families on a hot summer night, but they paid it to eat the product in that location.

Like most businesses in the boat harbour the gelato place ‘gets by’ in winter and makes hay while the sun shines as tourists and bikinis come out during the summer months. They hold their breath for those busy months—waiting. This winter a new, brightly lit, Ben & Jerry’s scoop shop opened two doors down from the gelato place. You hear the music along the boardwalk before you get there. The happy staff (lots of), are friendly, make eye contact and acknowledge every customer. Tasting is offered before it’s asked for. The ice cream may not be any better or even cheaper—especially by the time you’ve convinced yourself that you have to try the coconut dipped waffle cone. The difference is you feel like you’re somewhere, having an experience that was designed by someone who cared. Ben & Jerry’s is a destination. The gelato place is just a place that sells gelato.

The Ben & Jerry’s brand is vibrant, they simply choose to show up in a different way. They’ve worked out that the ice cream is experienced long before it is tasted, that the impression of the first lick happens long before the cone reaches the licker’s lips. Making things people want goes beyond the making of the thing. How we create experiences, tell stories and give our customer’s stories to tell matters. It’s not just what gets scooped into the cone that becomes the advantage.

For three years the gelato place acted as if they would always have the advantage of being ‘the one’. They acted as if their job was simply to mix ingredients, then scoop them from tubs into cones. They had a chance to leverage the loyalty of regulars who they mistakenly treated like tourists who would never be back. So the people who were loyal to them for three years have switched—just like that. It turns out that when we have an option we will always choose how something feels, before we choose how it tastes, looks or works.

The Act Of Possibility