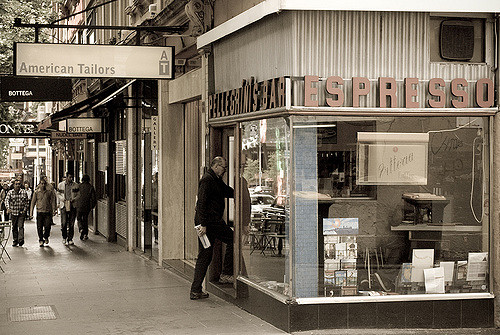 The cathedral was packed. More than a thousand people arrived on a warm Tuesday morning to attend cafe owner, Sisto Malaspina’s funeral. Many more stood outside—others watched the service at home on their laptops or giant screens in Melbourne’s Federation Square. We were there, not to mourn Sisto’s death, but to celebrate how he had lived. Sisto was a man who was grateful for the privilege to serve people. He felt fortunate to do work that mattered to him. And how he did that work became a reflection of his life and his legacy. Sisto was lucky, for sure.

After the service, the crowd slowly filed out the front entrance. People began talking as we got closer to the door. Two men behind me spoke about the service. Then one asked the other what he was up to next. “Are you heading back to work?” “Yeah, worse luck,” his friend replied.

During the service, one of Sisto’s customers (and friends) had spoken about why he would be missed. “You loved us, and we loved you,” he said. But then he went on to say something that people don’t often articulate. “There’s been a moment when we all wished we were Sisto.”

It was true. Everyone wants to show up to work with as much gratitude and joy, passion and pride as Sisto had done. Not just the people who were fortunate enough to be served coffee or pasta by him at Pellegrini’s—but you and me too.

It’s easy to think that it was alright for Sisto. He had his own business. He was doing something he loved. He was in charge of his destiny. He was one of the lucky ones. Many of us are not that lucky. But what if we could find a way to feel like Sisto? To be lucky by design and to feel fortunate for the work we do—whatever that work is. What if we looked for the moments in our day to make a difference? And if we can’t find some joy in our work, a way to do it with heart and soul, then maybe it’s time to think about how we could change that too?

How We Do Matters