How Everything Truly Great Is Inspired 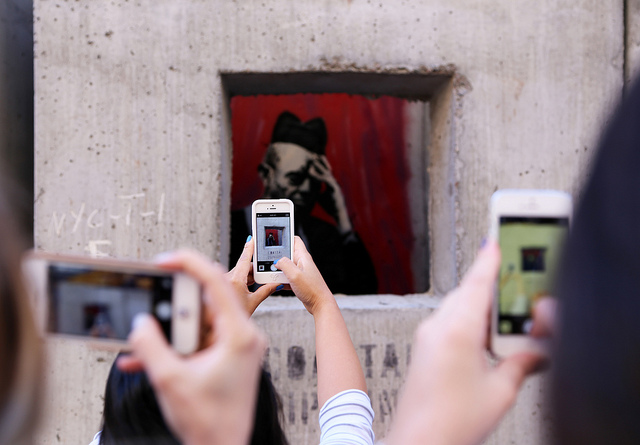 This is the story of a trap we all fall into. Every single entrepreneur or creator without exception is thrown off course by following a similar pattern. It doesn’t matter if you are on the board of a Fortune 500 or a designer trying to get her blog off the ground. The same struggle happens at both ends of the spectrum and everywhere in between.

You’re about to start a project, set up shop, begin blogging, develop a breakthrough product—what’s the first thing you do? You begin looking for inspiration and the first place you look to is your competitors—the people and companies you believe have everything worked out.

But sometimes you forget to stop looking and start doing. You begin to draw on their experience neglecting to build on it by using your own. You subconsciously focus on how hard it’s going to be to catch up, instead of intentionally learning from what they forgot. Their voice, purpose and way of showing up in the world gets louder and grows bigger, while yours seems quieter and smaller, until eventually it’s so muffled that you can’t find it at all. This is the point where some people stop showing up because they don’t gain the traction they had hoped for as a pale imitation of a competitor, influencer or market leader.

The people who stick with it know that there is a place where truly great ideas, writing, design, products, services, platforms and innovations are born, if only we would allow ourselves to tap into them sooner and more often. Everything truly great is inspired by our own stories and experiences—our unique worldviews.

I know for sure that as soon as I began putting more of my own experiences into my writing it got better. So what? Maybe you couldn’t care less about writing? You might want to be CTO of a global corporation, or CEO of the best company in the world? So this is where I draw out my trump card (and everyone else’s too). If we know anything about how Apple succeeded under Steve Jobs we know that he, as my friend James Victore would say, “had an opinion and put it in the work.” He drew inspiration from what he lived and saw other people living, not from what he saw another company do. The following passage from his Stanford Commencement address is worth revisiting.

“And much of what I stumbled into by following my curiosity and intuition turned out to be priceless later on. Let me give you one example:

Reed College at that time offered perhaps the best calligraphy instruction in the country. Throughout the campus every poster, every label on every drawer, was beautifully hand calligraphed. Because I had dropped out and didn’t have to take the normal classes, I decided to take a calligraphy class to learn how to do this. I learned about serif and sans serif typefaces, about varying the amount of space between different letter combinations, about what makes great typography great. It was beautiful, historical, artistically subtle in a way that science can’t capture, and I found it fascinating.

None of this had even a hope of any practical application in my life. But ten years later, when we were designing the first Macintosh computer, it all came back to me. And we designed it all into the Mac. It was the first computer with beautiful typography. If I had never dropped in on that single course in college, the Mac would have never had multiple typefaces or proportionally spaced fonts. And since Windows just copied the Mac, it’s likely that no personal computer would have them. If I had never dropped out, I would have never dropped in on this calligraphy class, and personal computers might not have the wonderful typography that they do.”

Of course everyone knows that Apple is the exception to every rule of success. There’s only one Apple after all and perhaps the same conclusions can’t be drawn in the industry you work in? Except that the Airbnb guys experienced the pain of not making rent, so they started a company unintentionally by renting out the extra space in their apartment. And Mark Zuckerberg created a platform for people like him, without quite realising how lonely the rest of the world was too. Then Dave Gilboa, Co Founder of Warby Parker lost a $700 pair of glasses he couldn’t afford to replace and it got him thinking about why glasses cost as much as an iPhone. The same rules applied in the pre-digital world of Adi Dassler—yes, Adidas got its name from the founder who learned how to make shoes by watching his father who was a cobbler. As an athlete Adi also came to realise that the right equipment could enhance human performance. He went on to design football boots that helped Germany to win the 1954 World Cup and athletic shoes that were responsible for enabling the gold medal winning performances of Jesse Owens and Dick Fosbury.

This isn’t just true in the world of product innovation. Great works or art, design, graffiti and literature from Banksy to Brontë are all inspired by lived experiences or drawn from within.

Your inspiration is all around you in your day to day. Your advantage probably already exists.
You’re just not looking there. Yet.

Where Will Your Next Big Idea Come From?

From Average To Exceptional

What Stories Are You Forgetting To Tell?