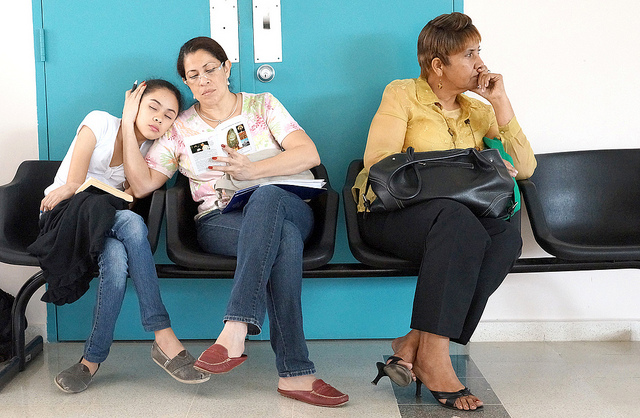 Back in the ’90s, when I was pregnant for the second time, our local health authority announced new measures to cut waiting times at hospital outpatient clinics. This was great news for me and other pregnant women who were often juggling appointments with work or childcare arrangements.

Late on in my pregnancy, I arrived for an appointment and handed in my appointment card. The receptionist noted my attendance and invited me to take a seat in the waiting room, among the dozens of other women flicking through worn out magazines or wrestling tired toddlers. I had barely sat down when a nurse called my name. Unbelievably, the clinic wasn’t just running to time—it was running ahead of time! On every other occasion that I’d attended waiting times had been over an hour, often two. The long wait was accepted as a fact of life. Doctors just run late. And yet, that day I was being seen immediately.

The nurse took me into a side room, weighed me, took my blood pressure, tested my urine and documented the time I’d ‘been seen’ in her paperwork. Then she brought me back into the waiting room where I sat for another two hours before the obstetrician finally called me in.

It’s easy to design the system that looks efficient on paper.
It’s easy to show up to a meeting without being present while you’re there.
It’s easy to reply to an email with a generic reply without ever responding to the problem.
It’s easier to treat the symptoms than it is to get to the heart of the problem.

Getting to the heart of the problem and caring enough to fix is way harder. But ticking boxes or papering over the cracks doesn’t meet our customer’s desire to feel seen and heard. And it doesn’t fulfil our need to do meaningful work either. That’s why the energy we devote to getting better at the hard part is worth it.

How we define and measure success changes how we shape the world.
Every one of us has the power to do that.

Get To The Heart Of The Matter

The Distinction Between Needs And Wants