Winning In The Difference Economy 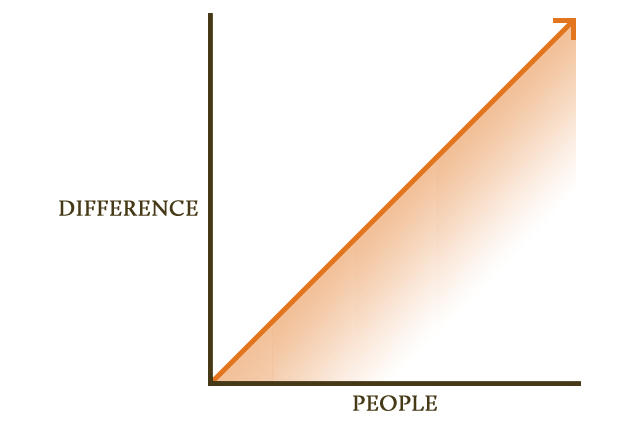 I’m not sure what department stores look like on a Tuesday afternoon in your neighbourhood, but in mine they are like ghost towns. Whole floors full of stock that changes with the seasons waiting to be bought by someone (they don’t know who), who happens to stop by. We all know the stories of the Davids beating Goliaths in the marketplace over the past decade—Borders losing out to Amazon and Blockbuster dying because of Netflix are just two examples.

Ask any business analyst why this happened and you’ll get a variety of answers. These companies were too slow to respond to shifts in the market, they didn’t embrace digital quickly enough, or they had too many layers of bureaucracy. What this all boils down to is two things.

1. They didn’t meet their customers where they were.

2. They were so focused on operating in the present, that they didn’t see where their customers might be in both the near and distant future.

If we look at some of the runaway business success stories of our time Dropbox, Uber, Warby Parker, Airbnb, Apple, Starbucks and Patagonia we find that they all have something in common. They knew who their customers were or would be and they built their businesses around being responsive to them. Their continued success is powered not by sales teams and marketing departments, but by creating difference for people, one person at a time.

The bigger the difference they create, even in the tiniest niche, the more (not the most) people they touch, the more successful they become.

The businesses that are winning in the difference economy are the ones that impact people on a personal level by staying relevant, they also shape culture by being responsive to the changes that a digital world has enabled.

The difference economy values and rewards businesses that put customer’s needs, wants and unexpressed desires first. Businesses that are built to respond to those needs, not simply to react to changing seasons and upcoming holiday periods. From coffee to computers, travel to data storage, the brands that succeed wildly are the ones that work hardest of all to see their customers before they build a thing.

A Compass For The Heart